The cancer epidemic we as pet owners are facing today is astonishing. According to the latest in canine cancer research, one in two dogs will get cancer. This blows my mind and has unfortunately in my experience, been true. Two of my my four dogs have had this heartbreaking disease.

Although I absolutely support all courses of treatment, I advocate for holistic when possible. Deciding which approach to take should be thought out, researched and you should be confident in the choices you’re about to make for your dog. I promise you, you won’t want to face this decision upon diagnosis. Some cancers are slow growing and sometimes it’s caught early enough allowing you that time to figure out which approach is right for your dog. Many times though, you’re faced with an aggressive cancer with rapid tumor growth and often times it has already spread to other parts of the body.

I have two very different experiences with two very aggressive types of cancer in my dogs and all I can do is share my story in hopes that it brings not just awareness to canine cancer, but also hope. When I first shared Truman’s story in 2017, people from all over the world were contacting me saying his story was giving them hope for their dog. In 2017, Truman’s story had only just begun! To this day, I still get emails and Facebook messages from people who are given hope because they came across Truman’s story. Yes, I cry every time! He was a very special dog with an incredible story.

When Joey passed away in December 2015, Titus took it really hard. He didn’t know life without Joey. They grew up together from puppies and were inseparable.

In 2016, I began researching holistic treatments for dogs with cancer when my Boston Terrier, Titus, was sent home on hospice and given less than a month to live. He had TCC Bladder Cancer. His chemo treatments worked at first but eventually failed and there was nothing left to do.

Shortly after losing Joey, Titus started showing signs of a UTI. We had just moved to a new state so I figured the stress from losing Joey and the move had everything to do with it. I took him to the vet, he was prescribed an antibiotic and we were on our way. Well the antibiotic didn’t clear up his UTI. This wasn’t uncommon in bad UTI cases so the vet gave him a second round of a much stronger medication. After a month of strong antibiotics, he was still not getting any better. Our next trip to the vet changed my life forever. I had no idea what was coming when she wanted to do an ultrasound. Cancer. A tumor on my baby’s bladder. He was referred to oncology. Chemo was an option, surgery was not due to the size and precise location of the growth. Had the tumor been a little smaller or not exactly where it was, surgery could have been an option.

Titus went through 4 months of chemo and at our final chemo appointment, his oncology vet came in the room with the most amazing news. The chemo was working. His tumor had shrunk to half its original size and he was now eligible for surgery to remove the rest. I cried, the vet cried, it was such incredible news! He had just had a round of chemo that day, so we needed to let it do it’s job before surgery. I scheduled his 2 week follow up, which is when we would go over all the details and pick a date for his surgery.

Within those 2 weeks, Titus went from being a prime candidate for surgery, to being sent home on hospice with less than a month to live. In just 2 weeks, his cancer took a turn for the absolute worst and came back with a vengeance. The tumor had now doubled its original size. He was maxed on the allowed amount of chemo, and there was nothing left to do. Before going home, his oncology vet mentioned looking into some holistic options to help keep him comfortable over the next month. This was a foreign language to me at the time but I was open to anything and I was determined to save my Titus.

In the time I had for researching a holistic approach to treating cancer in dogs, I learned A LOT, but I didn’t get the chance to use any of it to help Titus. I just wish I had known sooner that it was even an option. Although I was desperate to save him, his tumor was too aggressive, and he tragically passed 21 days later. When I say tragically, I mean it was really, really bad. It was awful and the most traumatic experience of my life. My baby deserved better. I did everything in my power to help him but I had no idea what was going on inside his body. The emergency vet sent us home without doing the tests they should have done. Titus should not have been sent home that night. It’s been 5 years since it happened and I’m still haunted by his final 12 hours. I’m the type of person to always look for the good in bad situations. I try to find a purpose to help understand terrible situations. Not this time. Cancer horrendously stole my innocent Titus and took a part of my soul with it. What good could come from that?

About 5 months after losing Titus, the nasty C word was back . This time it was my Truman. My recently rescued senior, Truman, was diagnosed with a rare but very aggressive lung cancer, and given 3-6 months to live. I adopted him about 7 months prior, he came with multiple health issues, but all were manageable. Hearing this, broke me. Not Truman! He had been through enough. His health check at adoption said all I needed to know about his past, it was bad. I couldn’t risk him going through what Titus did. I was also still badly grieving Titus and here I was a few months later hearing that word again.

Due to his age and poor health, I opted out of chemo and chose to treat his cancer holistically. I took everything I learned when researching for Titus and used it as my starting point with Truman. I joined all the support groups possible, registered him in a pet cancer research study, and spent all of my free time researching. I made a promise to Truman that he would be ok and I told him we are kicking this cancer’s butt in honor of Titus.

Truman had regular vet visits and x-rays done every 3 months to track any progression in tumor growth. One year after his diagnosis, when I first shared Truman’s story, his lung cancer was stable and all 7 of his tumors remained dormant. His cancer growth had completely stopped. At this point, I knew something was working, and if his cancer could stop growing, then there had to be a way to reverse it. There is no doubt in my mind that choosing to treat Truman’s cancer holistically, saved his life. I may not have been able to save my Titus, but through Titus, Truman was saved. It took a long time to see it, but I was finally able to see the purpose in what happened with Titus. Not only was there an added determination, but I had some additional knowledge that I didn’t have before. Life changing knowledge.

Truman blessed my life with almost 4 incredible years post diagnosis. It’s been a year since I had to say goodbye to my sweet Truman, but I’m happy to be able to tell people that he didn’t pass away from cancer. His aggressive lung cancer that doomed him to 3-6 months of life left, reversed. Cancer gone!

You can see the difference in his chest x-rays below. The fist 2 images are from his original diagnosis in 2017. They were cloudy and filled with disease. The big cluster at the base of his trachea was a big worry. The second 2 images are from 2018 when the vet confirmed, “There is no sign of cancer. Some scar tissue, but Truman does NOT have cancer.” His chest is clear, the cluster is gone and so are the scattered nodules. You can see some scar tissue build up and the BB gun bullet from his previous owners, but the tumors are gone.

I advocate for holistic treatment due to the journey I’ve been on with both of my dogs and the experiences faced during their battle against this awful disease.

Treating any disease holistically should not be done alone but with guidance and assistance from a professional. There is a lot you can do on your own, especially with prevention. It’s so important to do your own research too and join support groups with other pet parents going through the same thing. It can be hard to step into the world of dog cancer when your pet hasn’t had the devastating diagnosis. It’s kind of an out of sight out of mind thing. But it’s even harder when the diagnosis is there and the clock starts ticking. 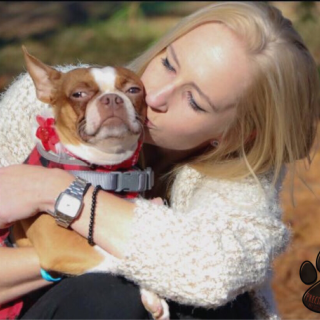